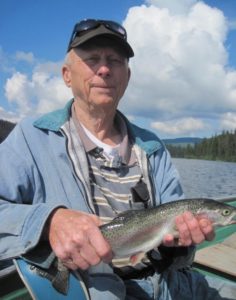 It is with heavy hearts that we announce the passing of Fred Braaten of Barriere, B.C. on February 05, 2019 at Royal Inland Hospital in Kamloops, BC.

Fred was born in 1935 in Wadena, Saskatchewan, and was raised in a two-room house with 19 brothers and sisters.

Fred moved to Clearwater in September 1955 where he later married and raised his four children.

Fred’s first job was working on a gang saw in the Clearwater flats Saw Mill for $1.35/hr.  In 1958, he found a career as a Correctional Officer at Clearwater Forest Camp, and its replacement Bear Creek Correctional Centre. Fred was very proud of his accomplishments as a corrections officer and dedicated the 32 years of his life to working in these institutions.  Fred accumulated a lifetime of stories about his time at CFC and Bear Creek: from finding stashed homebrews in the creek to chasing inmates lost deep in the woods of Wells Gray Park to saving inmates from anaphylactic shock with Benadryl. He would sell totem poles on the inmate’s behalf, and once received an award for saving an inmate’s life.

After retiring in 1992, Fred took full advantage of his many talents. Never slowing down, he built and flipped houses, fixed and flipped vehicles, gardened, invested in stocks, rented property, logged and even started his own handyman company.   Fred was an avid hunter and angler and was particularly fond of Babine Lake, as well as Skeena River for salmon fishing.  Fred also traveled extensively across Canada and the US to visit family.

As busy as Fred was, he always made time for others; he’d pop over for coffee, drop by with fresh vegetables or offer to help with a building project. He was always there for friends and family.

Fred was a man of his word, never said a bad thing about anybody, and was always ready to help anyone in need.   Fred could accomplish anything he wanted.  He was an amazing man, and he was the “go to” guy for advice on just about anything.

Everyone who knew and loved Fred will miss him dearly.

Donations in memory of Fred Braaten to Dr. Helmcken Memorial Hospital, RR1, Clearwater BC VOE 1N0, would be appreciated.