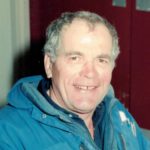 Adrien Clovis Piché passed away peacefully in Kamloops, B.C., on April 8th, 2018, with his wife, Fleurette, by his side.

Adrien was born in Bonfield, Ontario, and grew up in Timmins, Ontario. He would have turned 85 on April 28th. He is survived by and lovingly missed by his wife since 1980, Fleurette, née Béland. He is survived and dearly missed by his three sons, Robert in Finland, Denis in Alberta and Marc in B.C., and his four grandchildren, Amie, Jessica, Daniel and Brent, as well as two great-granddaughters, Sybil and Sloane, all in Alberta. Fleurette’s children, Dianna, Mark, Joanne, and Charlane, were an important and loving part of Adrien’s life and will miss him dearly. He is predeceased by his daughter, Suzanne, in 1957 and his first wife, Georgette, née Veilleux in 1974.

Adrien worked in Malartic, QC, Elliot Lake, ON, and Logan Lake, B.C. in the offices of mining companies, where he worked with many of the early business computers as an operator and programmer. He volunteered on the crisis line, and loved his time fishing at the cabin at Birch Lake.   After retirement, he and Fleurette spent many happy and warm winters together in Arizona. He always loved his long peaceful walks, which helped him stay fit and active into his early 80s.

Adrien loved reading, music, gardening, cooking, motorcycling, and the outdoors. He taught himself to play the harmonica and the keyboard, and his favourite games were chess and bridge. Adrien was a humble and honourable man, and always careful with other people’s feelings.
His memory will be cherished by all in his family, by his siblings, and by many other relatives and friends.

A special thanks for the wonderful care Adrien received in the past months at the Royal Inland Hospital, the Hospice House, and at Ponderosa Lodge.
At Adrien’s request, no memorial service will be held.