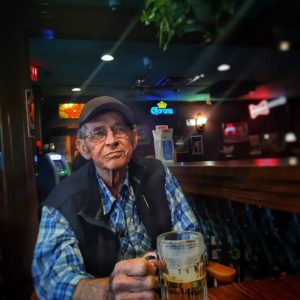 It is with heavy hearts the family announce the passing of Bill (Helmut) Kammerer age 75 on October 8, 2018 with his family by his side.  Bill was born on November 30th 1942 in Suckwitz , Germany. Bill moved with his parents to Canada in 1950 at the age of 6 years old. Bill lived in Saskatchewan until 1959  moving  to Vancouver and eventually ending up in Kamloops. Bill worked at Lornex /Highland Valley Copper for 28 years driving heavy equipment including truck #44 for many years and retired in 2008. Bill loved to cook and is remembered by many for waving a kitchen utensil and saying “get out of the kitchen” when anyone got in his way. Bill found great pleasure watching the birds eat from the feeders on the back deck.

The family would like to send a big THANK YOU to all the doctors and nurses at RIH, as well as the staff at Marjorie Willoughby Snowden Memorial Hospice for Bills care.

A celebration of his life will be held on the 20th of October 10:30 am at the Army and Navy Club at 177 Tranquille Rd. Kamloops BC