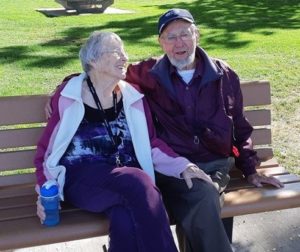 With thanksgiving for a life well lived and joy shared with many, it is with a few tears that we announce the peaceful passing of husband, dad, grandpa, and gg-pa Norm Atkinson.  Dad spent the last week of his life in the gentle care of Royal Inland Hospital staff in the emergency and on 5-south.  We are so thankful for the professional and caring attention that he received.

n was born January 9, 1928, the eighth of nine children of Chas and Blanche Atkinson, in Regina, Saskatchewan. His dreams of going to sea were set aside when his father died and Norm stayed home and got to work to look after his mother Blanche.  She lived her remaining years as a member of his family.  Norm took his plumbing ticket and carried on his father’s business, starting the Roto-Rooter franchise in Regina, and later in Kamloops. He loved his work, always with a smile, or a song.

The man loved to sing – not surprising, he met Grace when they were both involved in Operatic Society in Regina. They were married in 1953 and then the family arrived. Four little girls in five years and five years later one more! Norm and Grace were always involved in the church choir, and they got their girls singing together at the local competitions.  Norm would direct and Grace played the piano and many little musicals were produced at church in Regina and Kamloops.

In 1972 the family moved to Kamloops to join his brother, Gordon, in the laundry business, and to start up Roto-Rooter. Dad made sure that we learned about hard work, but he really loved fun and made sure his family learned how to play. The family of Saskatchewan skiers headed to the mountains – Norm taught 3 generations of skiers in the family and friends – he had a ski party for his 85th birthday! The Saskatchewan years, we spent summers at the cottage dad built at Kanata Valley, and soon after arriving in BC the cabin at North Barriere became a loved spot.

The home in Kamoops was such a treat after the little lot in Regina.  Dad dug up a huge garden and tended it faithfully and loved to share the bounty.  Always looking for the fun side, he grew great giant pumpkins!

Yes, he loved to play. he loved his family, he really did love his life.  He encouraged his family, friends and mere acquaintances to come on just give it a try.  He went to clown school when he finished plumbing, and entertained kids wherever he went.

He made friends and the neighbours became family and he looked out for us all. He was the neighbourhood Santa and he was loved by his family and friends, all with a special story to tell.

Norman and Grace were married for 66 years and 16 days!  They had great fun celebrating anniversaries and enjoying all the family and friends who celebrated with them.

And his adored (even though “I just can’t keep their names straight”) 22 great-grand-children – he smiled just thinking about them!  Caeleigh, Rowan, Callum, Silas, Alex, Isaiah Charles, Gabriel Norman, Oliver, Ashton, Luca, Askiy, Paige, Jackson, Shandy, Clova, Aubin, Paisley Grace, Jude, Emmett, Carter, Ciera and brand new Quinn.  There is a new little girl to be born any day, and Norm learned that there is one more great grandchild to arrive later this year — that will be 24!

He is also survived by so many nephews and nieces and neighbourhood friends who loved and learned about having fun from Uncle Norm.

You are invited to join the family at St. Paul’s Anglican church, 360 Nicola Street, Kamloops at 10:30 a.m. on Friday May 3 to celebrate Norm, and the smiles left wherever he went.

You may wish to honour his memory with the charity of your choice, your time or your money.