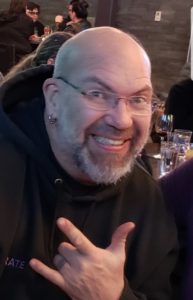 With great sadness, we regret to announce the unfortunate passing of David Christopher Crerar, also affectionately known by many as Pirate. Christopher was born on the 11th of February, 1970 in New Westminster, BC. He was involved in a tragic motorcycle accident, which took his life on the night of the 9th of August, 2019.

Christopher is survived by his loving wife, Christie, their sons, Tyler, Jared and Jacob, dog, Buddy, parents, Alison and David Crerar, brothers, Jeff and Steve, sisters-in-law, Amber and Andrea, nieces, Meghan, Mackenzie and Alexandra, nephews, Joshua and Porter. He is also survived by mother and father-in-law, Pat and Pete Henchen, sister-in-law, Jennifer, brother-in-law, Stephen, niece, Ivy and nephew, Owen, as well as many other family and friends. He is predeceased by his dog, Sasha, who was his constant companion and best friend.

Christopher attended Golden Secondary School in Golden, BC and graduated from James Fowler High School in Calgary, AB. He was owner operator of his own business, Topher’s Trucking, a long haul trucker, equipment operator, dump truck driver and log truck driver, most recently for D. Munden Trucking. Christopher was also owner/operator of Pirate Transport and was known as a highly respected, professional driver. In his own words, he was a “jack of all trades, and master of none.” Christopher enjoyed riding his quad, motorcycles, both on road and off, flying, boating and other water sports. He was also a talented artist and amateur photographer.

A celebration of life will be held on the 24th of August, 2019, from 1pm to 6pm at the Splatsin Centre in Enderby, BC.

Offer Condolence for the family of Christopher Crerar 1970 – 2019