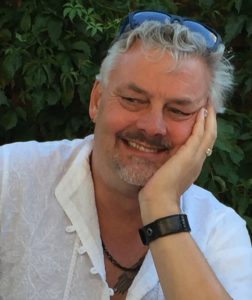 Dan was born in New Westminster on April 9, 1958. Dan was always sure to say it was BEFORE his twin brother Darrell. Dan spent his early childhood in Quesnel, and then spent his teenage years in Coquitlam where he graduated in 1976. Dan started his first job in the building supply industry, alongside his brother when he was 16 years old. Dan spent the first part of his life sharing everything with his brother Darrell; first minibike, first truck, first house, second house……. third house. During this time Dan started a family with Susan and they had 3 children. Chad, Jason and Brandie-Lynn.

In 1998 Dan and wife Marlene moved to Clearwater and purchased the Irly Bird building supply store. Over the years they ran and grew the store to what it is today. The store, now RONA, is filled with employees that are very much Dan’s family members.

Dan spent that last several years of his life, living it to the fullest. He travelled the world visiting many different countries, following NASCAR races and his son Jason’s stock car racing. When not out of the country, Dan would drop in on Brandie-Lynn or Jason any time he was nearby, growing the father/child relationships to their full potential. Dan couldn’t help but pull out his phone and snap a selfie with each of the grandchildren every time he visited.

Other than his family, Dan had two prized possessions. A 1970 Buick Skylark that he purchased in 1980 and painted with an eagle tribute for late son Chad, and his 2009 Saturn Sky “Blue Eagle” which was his baby when he didn’t have his children or grandchildren around.

There will be a Celebration of Life Service for Dan Schapansky at 2:00 p.m. on Saturday, July 7, 2018 at the Royal Canadian Legion, Clearwater, BC.  Donations can be made in lieu of flowers to the Clearwater Volunteer Fire Department Chad’s Park fund.