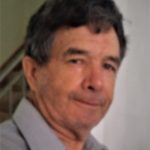 Dan McCrady of Williams Lake, BC, was born in Weston-Super-Mare, Somerset, England, on March 3, 1945.  He died after a short period of illness at Royal Inland Hospital, Kamloops, BC, on April 6, 2018, at 73 years of age.

Dan is survived by his Spouse, Julie McCrady, Delta B.C.; Son and Daughter-In-Law Ove and Rachel McCrady, Fleet Hampshire England; Sister and Brother-in-Law Lynne and Rob Kendall, Tourtour Provence France; Grandchildren; Niece; Nephew; Fellows and Friends. He is predeceased by his Mother Moya McCrady, Taunton Somerset England and Father Tom McCrady, Princeton B.C. Dan, in his early adult years, became a Paratrooper and Royal Engineer in the British Army. Later in Canada he worked as a Sawyer for sawmills and log home construction. He held also many other roles in construction and building industries. He was a devote Christian who belonged to Baptist, Methodists and Evangelist churches; and several smaller prayer groups. Dan worked in Christian ministry in Cambodia and far east on many occasions.

Dan was a deeply committed Christian as follower and in fellowship. He was a master sawyer who worked in log house construction, sawmills and forestry. He was a true son of British Colombia, Canada, and had lived in many places from Vancouver through the Okanagan and B.C. Interior. He was a skilled mechanical technician of both light and heavy machinery.

A memorial service was held on Wednesday 11 April after 4pm, at the Cariboo Bethel Church in Williams Lake (833 Western Avenue) led by Pastor Jeremy Vogt.

We would like to express our heartfelt appreciation to the paramedics that brought Dan to the Royal Inland Hospital and all the doctors and nurses in ICU for their excellent service and care for Dan.  Condolences may be sent to the family at DrakeCremation.com