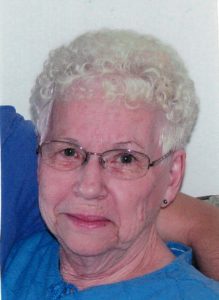 It is with a deep sense of sorrow and loss that our family announces the passing of our mother Doreen after a short battle with cancer. She was a wonderful wife, mother, grandmother, great grandmother, sister and friend. Doreen was born in Edson, Alberta on June 5, 1933 to Burnett and Katie Cooper and passed away in Kamloops, BC on May 29, 2018 with her family at her side.

Doreen was an inspiration to her family, always putting everyone ahead of herself. She kept a strong faith that was very important to her, and always kept the Lord dear to her heart. Mom would stop the world to ensure that her family was taken care of, always offering kind words, or standing at their side whenever needed. She taught her family to love one another, and as her life drew to an end, she was satisfied that she had done just that.

Mom lived at Cottonwood Manor for the past 17 years, volunteering for many functions, enjoying the company of her many friends over a cup of coffee, and we know how much you all meant to her.

Thank you to Dr. Franky Mah, the doctors and nurses at R.I.H., the staff at Marjorie Willoughby Snowden Memorial Hospice, and Drakes’ Funeral Home for the care, kindness, and compassion that was offered to our mother, and to ourselves during this difficult time. Our mother will be laid to rest in a private graveside service next to her beloved husband Lloyd in Jasper, Alberta which is a place that was very dear to both of them. If so desired, donations may be made to Marjorie Willoughby Snowden Hospice in Doreen’s memory. Condolences may be sent to the family at DrakeCremation.com

Rest in peace – your loving family

Offer Condolence for the family of Doreen Bliault 1933-2018