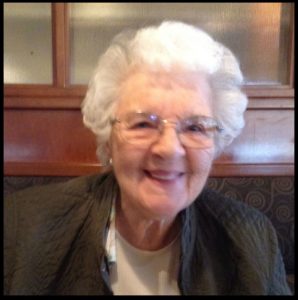 It is with great sadness that we announce the death of our mother, Dorothy, on July 22, 2019, after a short illness.

Born as Dorothy Filmer Powys in New Westminster in 1924, to parents Edna Dorothy McDonald Powys and George Ingram Powys, Dorothy grew up among a close network of McDonald, Powys and Galbraith families.

She met the love of her life, husband Keith Atwater at the Cultus Lake Roller Rink and they married in August 1946, after Dorothy received her RN cap from the Royal Columbian Hospital School of Nursing. While raising their four children, Dorothy and Keith lived in south Surrey, Burnaby, and Kamloops. In 1965 Dorothy returned to school and earned her Public Health Diploma at the UBC School of Nursing. When the family moved to Kamloops in 1966, Dorothy started work as a Public Health Nurse at the South Central Health Unit, where she worked until her retirement in 1987.

She was predeceased by husband Keith and eldest son Bryce.

Along with spending time with her family, her favourite pastimes were playing bridge with friends and in later years, doing crosswords puzzles, and she wore out several crossword dictionaries.

We would like to extend our gratitude for the care provided by Dr. Kraig Montalbetti and staff, and the team on 4North at Royal Inland Hospital.

A celebration of life will be held on Saturday, October 5, 2019 at Desert Gardens Community Center 540 Seymour Street at 2:00 pm.