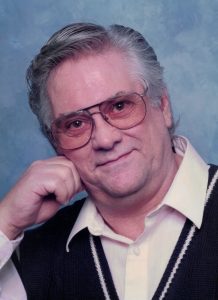 Donald Walter Dougal Bailey (Doug) was born Oct 5th, 1940 in Ocean Falls, BC.  He was an interesting character who led an amazing life. Doug used to regale us with tales of hanging around the living room as a young person, with his father and friends – people like Flying’ Phil Gaglardi’ – these colourful men had a significant impact on Doug’s life.

Doug was fascinated with computers.  He worked for IBM for many years, travelling all over Canada & the USA.  He taught computers at the Vancouver Community College, and eventually opened his own Computer sales & repair business in Coquitlam – H&S Microsystems. H&S even outgrew its tiny space in the strip mall and moved to Burnaby. Over the years he met Stewart Goodin, with whom he formed an amazing bond and kinship around computer repair.

Marriage was a big deal in Doug’s life plan. Unfortunately, his first attempt was short lived and he and

Donna split after a few years. He met Glennis; and were married in 1970.  Together they had two children, Christina and Jeff. Doug & Glennis divorced after only 12 years of marriage, and Glennis passed away in 2000. As time went on, his friendship with Stewart’s younger sister, Debra Anne (aka Lori) turned to romance, and they were married on Sept. 09, 2000. They remained married for 22 years until Doug’s passing.

When Doug and Debra moved to Clearwater in 2007, they thought perhaps they might ‘flip houses’ – but the Good Lord had other plans for them as Doug’s health deteriorated and although he never complained, he suffered a heart attack and a stroke, beat diabetes, recovered from two broken wrists, and valiantly fought off colon cancer for many years…. How could he do all that without complaint? Well, he got a job with Don Rogers (Surprise: Computer repair and more!) and he developed a love for chickens and as all of us in the area know: Doug and Deb put their challenges aside and full-heartedly joined the volunteer world. Doug was the first ever male chairperson of a local Royal Purple Lodge. He led Lodge #302 Clearwater. Doug was also a security guard for Clearwater Police, an active member of the Emergency Support Services group, the Royal Canadian Legion, the Blackpool Hall committee and contributed many hours of service to the NT Aboriginal Cultural Society.

Doug passed away peacefully in his home without pain with Debra and their dear and close friend, Cheryl  Thomas at his side on November 8th, 2022.  He will be missed by his loving wife Debra, his fur babies Mandy, Kaiser & Toby, his children Christina (Rob) and Jeff (Angie) and grandchildren (Alissa, Leif, Celeste), his sister Robin (Bill), Susan (Larry) (predeceased by his sister Betty-Jean.(Gerry)), Brothers in Law, Stewart Goodin and David Marks (Linda), his nieces, nephews, and all his friends and neighbours who have met and loved him over the 82 years of his great life on this earth.

Debra and Doug have always been very thankful for their community, as the children are 2,000 and 5,000 kms away. A GoFundMe has been set up to help Debra with funeral arrangements any and all help are greatly appreciated. https://gofund.me/1cc22c37

There will be a gathering announced in the coming weeks to celebrate and remember Doug Bailey.