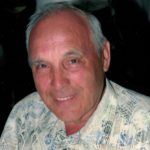 It is with great sadness that we announce Ernie’s passing. Survived by his loving wife of 58 years Isabel, and daughter Wendy; his siblings Alfred, Allen, Dan, Peggy, Evelyn, Alenda, Adeline and Christene. Ernie was predeceased by his parents Ralph and Lena Schaeffer, and by his siblings Harold, Charlie, Rudolph and Marilyn. Born in Assineau, Alberta on Dec 26,1932, Ernie died April 19, 2018 in Royal Inland Hospital in Kamloops, B.C.

Ernie grew up working on the family farm raising mink and commercial fishing. In his late teens he started his first job, employed by Northern Alberta Railway, then on to cutting pulp wood and shipping. As a young man with a few dollars in his pocket and a Prefect car he set out to make his fortune in B.C.

Ernie dug holes by hand for power poles in Burns Lake, worked in sawmills, then on to the future site of Kitimat, where he was one of the first to drive a cat clearing for the town site. After too much rain and mosquitoes he set out for the West Kootenays and the logging industry. He drove logging trucks for Celgar in Nakusp and area, future father-law Karl Stach at Arrow Park, making many good friends and special memories, also mentoring young truck drivers. “He was one of the best.”

In 1960 Ernie decided to settle down, marrying Isabel and started a family. Wendy was born in1961, his pride and joy. He started his own logging contract company, Ernest Schaeffer Logging Ltd. We left for Lillooet in 1967 due to the flooding of the Arrow Lakes, a year later moving to Kamloops. He continued his logging career with Tolko and Weyerhauser until his much earned retirement.

His love of travel took us to many countries, his favorite was New Zealand. Summers spent camping, fishing driving the back roads, looking for lost lakes and huckleberry patches. Winter; ice fishing and skidooing.

Ernie was a man that saw the best in everybody; he was patient and loyal to his friends and welcoming to all. He loved his family, as we loved him, giving everything he had to give to them. So when you see a loaded logging truck barreling down a bush road, a fisherman in a canoe, or a motorhome at a secluded lake, remember Ernie with a smile.

We would like to especially thank Eric Wenzel, his long time best friend, like a brother, since the 1950’s and John Winsor, his fishing hunting and all around good friend. Also, Norm Ahlstrom his friend of many years on Orcrest Drive. Your support has been greatly appreciated and won’t be forgotten. Special thanks to Betty and Vera.

At his request no formal service, but a Celebration of Life at a later date to be announced. If you wish, donations to the Kamloops branch of the SPCA or RIH foundation will greatly be appreciated. Ernie will be so missed in our lives, until we meet again. Condolences may be sent to the family at DrakeCremation.com