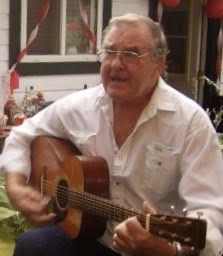 It is with great sadness to announce the passing of Frederick David Langton.  Fred is survived by his daughter Gail Parlby (John Sutherland), his two grandchildren, Kerri Batalha (Tony Batalha), Kelly Parlby and his great grandchildren who looked up to and affectionally knew him as their Popeye. Fred was predeceased by his third wife Dolores and his first wife Gladys. He is the last of 10 siblings to join his parents in heaven.

Fred was born in New Westminster August 16, 1927 to Frederick Wenman and Jean Jolly (Carnegie) Langton. He lived a long life full of many great adventures.   He was a businessman and settled in Kamloops where he lived for the last 50 years of his life.

Fred has always been a hard working man and led a well rounded, adventurous life.  As a young adult as a merchant marine he sailed up and down the Panama Canal.  When his time was finished to get home, he and his mates would hop a train and travel from the East Coast of Canada back home to the West Coast to his family at the Coast and The Langton homestead on Monte Lake. Fred lived through the great depression and never wanted to see anyone of us go through that again.

His last  hitchhiking trip home was to marry the love of his life Gladys Elizabeth Herling.  Together they adopted Gail Elaine Langton and began their life in Vancouver BC. Fred gave up the highway transport trucking to be home closer to his family and began logging all thru the coastal Mountains, the Arrow Lakes and the Interior of B.C. In 1970 Fred moved his family to Kamloops BC for a business opportunity. Fred had gravel trucks for many years and then started what was known as Fred’s Topsoil. Dad definitely found his passion in pleasing his customers with his rich Black Peat that he was so proud of.

Dad has always been a hard-working man even when he wasn’t in the yard he was at home in the shop fixing trucks and tinkering away.

He’s not only a father, step-father, brother, son, and Popeye, AKA grandfather and great grandfather but he was also a loving Uncle Freddie to all of his nieces and nephews who he was extremely fond of.

Fred was a proud family man and loved gatherings and didn’t need a special reason. That’s when the silly jokes would be told that you’d heard a million times before and out would come his Old faithful guitar. Fred loved his Country music and strummed the ballads of his country legends on his beloved old Martin guitar and played his bluegrass favourites with his harmonicas.

He was a strong hard-working bold role model to everyone around him. Fred lived to the age of 92 and has lived one heck of a life and will be deeply missed. May you Rest In Peace now Dad, clear from dementia. The Family would sincerely like to thank Dr Mavis Hollman for her years of dedication and compassion to my Dad and walking with us through Dad’s final Days.

We would also like to thank the nurses and care aides at Brocklehurst Gemstone Care Facility for the kind genuine care for my father in the last months of his life.

Due to Covid 19 Virus a small family gathering will be held at a later date.