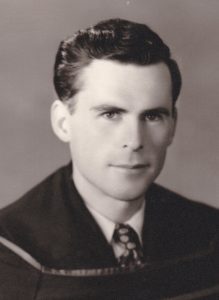 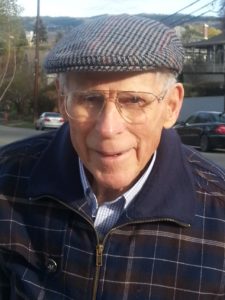 Harold grew up in Kitsilano and Burnaby. He graduated from UBC with a B.A. (Sc.) and while managing and eventually owning Fletcher Lumber he became a founding member of the IRLY Bird organization.

He loved the outdoors and with his family camped, hiked, and skied. Memorable destinations included Spruce Lake, Expo 67, Maui, Japan, Mystery Trips, any place where there were singable, danceable songs and particularly his children’s homes. Upon retirement he and Ruth moved to Salt Spring Island and plunged into island life. There, he loved golf and singing with the Salt Spring Island Choir. Moving to Kamloops 13 years later he devoted himself entirely to caring for Ruth.

In the past decade his real joy was watching his many offspring grow and learn. Frequent calls, photos and visits by family and friends sustained him. To the end he was involved and interested in what they were doing, smiling as he looked at real time pictures of them. He was the first to say that he had a wonderful life.

Special thanks to the caring staff of Chartwell Kamloops and Royal Inland Hospital. A Memorial Service will be held on Saturday, 22 June 2019 at 2:00 PM at St. Andrew’s Presbyterian Church on 6th Avenue in Kamloops. Reception to follow at the church.

In lieu of flowers, those who wish are asked to give to a charity of their choice.

Offer Condolence for the family of Harold Elmer Atkinson 1922 – 2019