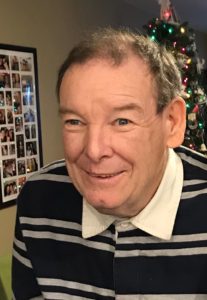 On May 5, 2019 with his niece Cheryl Gagliano & John by his side, God took John Woodrow home.

John was born on February 22, 1952, in Ashcroft, BC and the doctors told his parents that he would not live long after birth, and here we are, 67 years later, blessed beyond words to have known such a loving soul. John always showed joy, even as a young boy. When it became too much for his mom to care for him due to his intellectual disability, he moved into Woodlands and from there to Tranquille. John was a survivor! Once Tranquille closed he moved into a group home and from there to the home share program, living first with Kirk Bilous and then with Kirk’s parents, Sharon & Orest Bilous; for 24 years John was blessed with their love and support. The last six months of John’s life was full of health challenges, long hospital stays and he was in need of 24 hour care. He moved into the McArthur group home January 30, 2019. Through all of these trials and challenges, John’s smile never stopped growing and his love of life continued to shine. Thank you to all the loving souls that cared and showed kindness to John over the years.

John worked at the RMS Horticulture Program for the last thirty years. He loved his job, especially planting seeds with Kristen for their annual plant sale. He never missed a day of work unless he was sick, even then, it was hard to keep him home. He was a dedicated employee.

Who was John? He was the smile that lit up a room, eager hand shake that showed respect, the charmer of compliments to get his way, he was a hardworking man that loved to work and help, the lover of Coca-Cola and coffee, the huge grin giver when company visited, even if it was for a few minutes, he was the comfort of a hug, he was the joy to make you forget you were having a bad day, he encouraged you to be a better person by just being in his presence. He was LOVE, GRACE and GLORY. He truly enjoyed life in its simplest form, he knew how to live.

John, you were so brave to endure what you did. You deserve to rest in peace now. We love you and know we will see you again someday. Watch over us now as we have done for you.