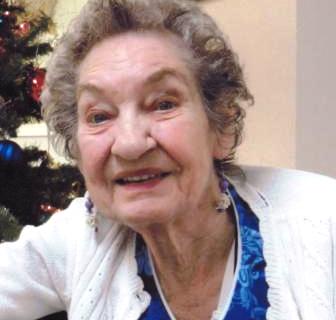 Irene worked as a sales clerk at Woodward’s and at Hudson’s Bay Stores.  She was involved in many community activities in the Lower North Thompson valley, and in later years attended numerous activities at Ponderosa Lodge.  She enjoyed tending her gardens in Aspen Park and holding huge family gatherings at Christmas time, birthdays and other occasions.  We have good memories of Irene participating in N.T. Valley Fall Fair exhibits, and in later years she became a flea market maniac!  Her hands were always busy knitting, harvesting canning or cooking.

Irene’s most cherished times were vacationing in Hawaii with her husband George.  After he passed in 1987, she continued this experience with many friends and later with her daughter Patricia.  Irene made friends wherever she went.

A gathering to celebrate the life of Irene Kibble was held at the North Shore Community Centre, 730 Cottonwood Avenue, Kamloops, BC on Sunday, July 10, 2016 at 11:00 a.m. Interment in the family plot in Hillside Cemetery will take place at a later date.  Online condolences may be sent to the family via DrakeCremation.com.