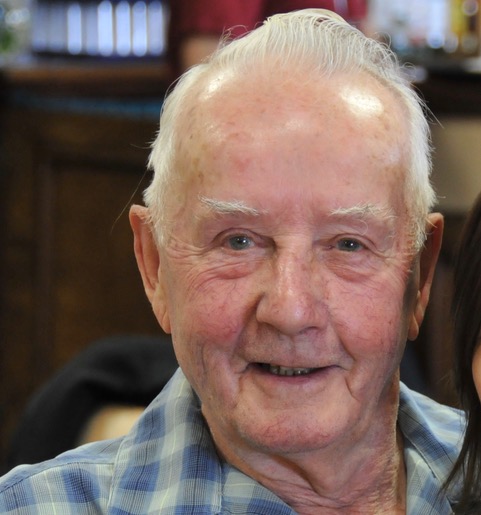 My most amazing Dad,  John Nicholson, decided that it was his time to ride off into the Sunset to reunite with his loving wife, Joan and daughter, Rena.  It was a beautiful sunny afternoon when he soared high above at 2:55pm while I, his loving daughter Deana (aka “Sis”) of 57 wonderful years, and his beautiful granddaughter, Stephanie Lynn held his hands and whispered love into his ears the entire time.

I can’t begin to explain how very blessed I feel to have been chosen to be his daughter.   I swear this man thought I walked on water; however, he also knew from me telling him thousands of times, how I thought he walked on water.  In my eyes, he could do anything possible and he actually did!  He hunted, fished, could build anything; he was a very successful ball player and, in his later years, a great bowler.

We both suffered dearly losing his loving wife and my Mom, Joan, in 1989.  Previously in 1985, my sister, Rena’s life also ended way too soon at the age of 25. His role as Grandpa came shortly after Mom passed away. What an amazing grandfather he was to both my children, TJ and Stephanie.  Then came along a beautiful great granddaughter, Lexi, in 2008 and his great grandson, Klaas, in 2016.  They brought him much joy and happiness.  He was a very proud Great-Grandpa.

John’s accomplishments were many!  He had a lengthy and successful career as a Correctional Office and, before his retirement, as his last big accomplishment and with the assistance of the inmates, he spearheaded and executed the completion of the Pritchard Rodeo Grounds. My Mom was a huge part in getting this project off the ground and willingly offering my Dad’s services for the project.  She was always good at volunteering him!

After he retired, John was very active playing Seniors Slow-Pitch, from 55 to 72 years of age, where he travelled throughout BC and Alberta, to Texas, Washington and Arizona and also to Uji Japan, Kamloops’ sister City.  After deciding it was time to hang up the cleats, he decided to adorn bowling shoes for a few more years.  But his lifelong accomplishment was his amazing garden!  He had the ability to grow pretty much anything, the bigger the better in my Dad’s eyes when it came to his garden.  He had an annual competition with his long time closest best friends, Ingo and Teresa Meierhofer, about who grew the biggest tomato, the biggest potato, the biggest garlic etc. Dad’s garlic was what he became really “famous” for in our beautiful small close-knit community of Pritchard BC.  Also, his wonderful neighbour, Carreen Olson, would come by every couple of days to work in the garden with him and then join him for their own happy hour glass of white wine afterwards.  John was always so very generous with his garden.  He got a lot of enjoyment out of delivering fresh garden vegetables to the neighbours, always unannounced and never wanting anything in return except for neighbourly friendship, a hand shake or a wave from passersby.  He loved and enjoyed many morning coffees sitting outside admiring his beautiful garden.

Needless to say, this man has left a huge hole in our physical world, but like the saying goes, “Heaven has gained an amazing Angel”.  I’m truly happy he is now with his wife (Joan) and daughter (Rena).  John was also predeceased by his sisters, Marie Potvin and Jean Turley, and brother Ron Nicholson.

He is survived by his loving sister and brother in law, Sharon and Don Wiens and numerous nieces and nephews.  John leaves behind his pride and joy, grandson TJ Hilash, granddaughter Stephanie Lynn Hilash, and two super amazing great grandchildren, Lexi and Klaas, who loved their “Papa” dearly and he loved them back just as much.  Learning to live life without Dad is going to be the hardest challenge I have ahead of me.  People who knew my Dad also know of the undeniable love we had for one another.  Again, I thank the Creator for giving me 57 years full of overflowing love.  I feel the luckiest ever!

John was very witty and had a great sense of humour.  Here’s an example of his humour.  Close to the end I asked him, “Dad, in lieu of flowers, if people want to make donations where would you like the donations to go?” His hilarious response was, “To me” (meaning himself – LOL).

He passed away from liver failure after a short stay at the Marjorie Willoughby Hospice Center, where we are so thankful for the awesome and loving care he received.   In lieu of flowers, if you wish to donate to a charity of your choice that would be wonderful; however, given the current pandemic situation and many people struggling, I know my Dad would absolutely not expect anyone to donate.  Please understand my Dad would not think this was necessary at all.  John was very dedicated great friend to so many people and that is what he thrived on during his life.

There will be no service as per John’s wishes.