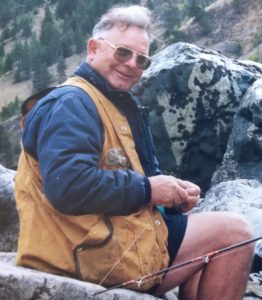 It is with deep sadness we announce, with daughter and granddaughter at his side, Dad launched his boat to fish once again with grandpa and grandma.

Dad was predeceased by his father Wes, mother Tilly and brother Dale.

Dad was born in Vancouver, BC, lived most of his years in Hammond and Haney, then to Boston Bar, on to Lytton and finally Merritt. BC boy for sure and very proud Canadian!

Dad’s first job was at Woods Turkey Farm in Hammond BC . The railroad was next as coal stoker for the steam engines in Kettle Valley BC. He was then hired on at Hammond mill where in 1953, acquired an apprenticeship to become an electrician. He became a certified electrician in 1958. His troubleshooting skills were amazing and he was very well respected in his profession. He remained with BCFP Hammond division until the mid 1970’s, when he transferred to BCFP Boston Bar division as Maintenance Supervisor. From there dad ventured into his own very successful business, Kelly Rose Electric for his remaining working days.

Dad’s love of family was beyond measure. Nothing was more important than his children, son in law, daughter in law, grandchildren and great grandchildren. He regularly checked that everyone was ok. Dad’s sense of humor and love of life was never-ending! He had the brightest sparkle of mischief in his eye. Dad lived to be 83.333 years old and was very proud of the fact. He was an adventure, living more than 9 lives in his 83 years, one episode after another. He was a man of  innumerable interests. He loved music and had his own band, Bluegrass being his favorite. He loved to ride his tractor, be kind to people and help them out. He loved bartering for a good deal, lol.  He thoroughly enjoyed watching cartoons, with Wiley Coyote, Yosemite Sam and Fred Flintstone among his favorite characters. The cartoons were the prelude to Hockey night in Canada for him.  He loved travelling and learning about other areas. He loved living up country, eating good food and CANDY! He loved to B.S. with anyone and held such a broad range of interests. He was a great fisherman, enjoyed it thoroughly and shared his knowledge with others. Thank you Dad. He was an avid Canucks and Blue Jays fan through thick and thin. He was a volunteer fireman in his younger days. He was a very talented and kind hockey coach getting up in the early hours to pick up those players who didn’t have a ride. He coached baseball and was an amazing hockey referee. He absolutely loved animals and particularly his cats. Dad loved building things skookum as he put it and that included all his homes.

Dad loved to learn, He was a very intelligent man who accomplished a great deal in his life. He was very learned in world politics and economy, science, medicine, electronics, astronomy, always owning a telescope, space exploration, the stock market, horticulture and more. He never lost his thirst for learning.

He was a very unique and interesting man, loved and enjoyed by many from all walks of life. We will have loving and hilarious never-ending stories to carry us through days ahead until we meet again. Thank you Dad, we love you, will miss you very deeply and were very proud to have you as  our father.

Special thanks to staff at Merritt Hospital, Merritt Home Care especially those that took extra special care of Dad, Kamloops Royal Inland Hospital Doctors and amazing 6 North nurses , Pastor Dwight, Blacks Pharmacy and BC Ambulance Paramedics! Heartfelt thanks to all who assisted Dad repeatedly over the years which  allowed him to remain at home.  Donations to Angels Animal Rescue Society in Merritt BC in Kelvins memory, would be greatly appreciated in an attempt to fix all the cats “our father” put into the community! 😉

Offer Condolence for the family of Kelvin Daniel Lambright 1935 – 2018