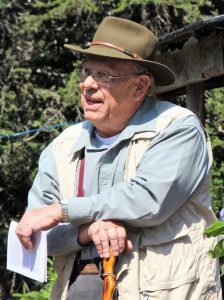 Lloyd Clyde Strickland was born Dec. 21, 1942 in Longmont, Colorado, the only child of Ray and Cleon Strickland. He graduated from Longmont high school in 1960 and moved to Joplin, Missouri that fall to attend Ozark Bible College. He graduated in May 1965.

In September, Jean Powell started as a student at O.B.C. and worked in the college cafeteria. By the end of the month she and Lloyd had met and started dating. Two years later, August 28, 1963, they were married on a Wednesday and started back to class the following Tuesday. The apartment was across the alley from the college so really handy for classes.

Lloyd had come to Clearwater in the summer of 1963 to work with the Howard Dillon family in Vacation Bible Schools and Dunn Lake Bible camp. At the end of the following school year Lloyd and Jean came back for another summer of helping. In the fall of 1964, they were asked to return to take over the new little church plant in Clearwater. Lloyd graduated in May 1965 and on July 15 they crossed the border at Osoyoos as landed immigrants with 6 mo. old Melissa.

Lloyd worked at many jobs over the years to supplement a small church income. They included working on Moilliet’s ranch, helping build 3 or 4 houses, delivering mail part-time, jail guard, chaplain, and ambulance attendant. He has served on several boards in the community, married over 500 couples and done innumerable funerals, and been manager for Dunn Lake Bible camp.

Family camping trips and hiking with family were some of his favourite times.

A Memorial Service for Lloyd will take place later this Spring.

Friends may send condolences to the family on a page dedicated to Lloyd at DrakeCremation.com