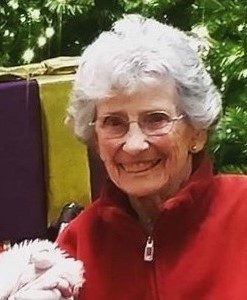 (when a bell rings an angel gets its wings)

It is with great sadness that we announce the passing of Lorraine Archibald.  She peacefully passed away in the presence of her loving family on August 20, 2018 in Kamloops, BC at the age of 86.

Lorraine is survived by her loving husband of 57 years Leigh, daughter Jackie (Brian), Kamloops BC, granddaughters Shauna (Cory), Kamloops BC and Amanda, Victoria BC , great-grandchildren, Layne, Connor and Henley, Kamloops BC.

She also leaves to mourn, her brother-in-law Hugh (Kelowna), her niece Sharon (Edmonton) and nephews Joel (Kelly) (Teulon) and Dean (Susan) (Saskatoon) and many friends that Lorraine has made throughout her life.

Lorraine was predeceased by her parents John A. and Hazel Campbell, her brothers Les (Kay) and Lionel (Faye) and sister Vivian (Elmer), sister-in-law Marg, and niece Sandi.

Lorraine was born in Teulon Manitoba on August 30, 1931.  Her early years were spent growing up in Teulon.

She met Leigh in 1959 on a blind date that her girlfriend set up and the rest was history.  They married in 1961 in Teulon, Manitoba.  They began their new life together in Dauphin Manitoba.  In 1962 they moved to Brandon and started their family. In 1964 we moved to Edmonton which was the start of her tour of all four western provinces.  We finally ended up in Kamloops in 1972 where Lorraine was able to set up permanent roots and make life long friendships.

Lorraine always kept herself very busy.  She was always cooking, baking and cleaning and lending a hand to whomever needed it. She loved to play cards and played a mean game of canasta and skipbo.  She also loved to go to bingo and enjoyed the odd trip to the casino.

Lorraine had the ability to light up a room with her smile.  She loved unconditionally and spent a lifetime building memories with everyone she knew.

She now rests with the angels and we know that her wings are protecting each and everyone of us.  Until we meet again mom we will be watching for the hummingbirds.

The family would also like to express heartfelt thanks and appreciation to the nurses and Dr’s of 5 South at RIH who went above and beyond in their care of mom.  Special thanks also to Dr. Cribb and Dianne for their support and care.

There will be a celebration of life which will be held in the Grande Hall at the Hamlets in Westsyde, 3255 Overlander Drive, Kamloops, B.C. on Saturday September 8, 2018 at 2 pm.  Condolences may be sent to the family at DrakeCremation.com.

In lieu of flowers donations can be made to the Canadian Cancer Society, the Alzheimer’s Association or a charity of the donor’s choice.

Offer Condolence for the family of Lorraine Archibald 1931 – 2018