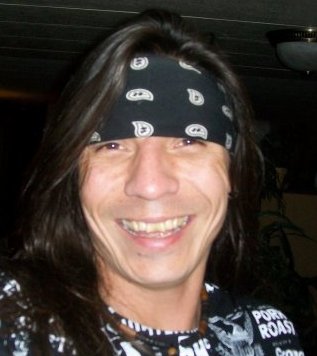 LOUIS PATRICK NEIGHBOR passed away suddenly in Barriere BC on January 31, 2017. Louis was the youngest child of eight, born to Norris Neighbor and Louise Neighbor (Kiyawasew) on October 22, 1969 in Fort St John BC. The family moved to Kamloops when Louis was in elementary school and then to Chu Chua and then purchased their family home in Barriere, BC where he grew up and graduated from Barriere High School in 1988. Louis made lifelong friends from Chu Chua and Barriere and area and was known for his love of music and kind, thoughtful ways. He would spend many hours playing guitar, and jamming with friends and family. Louis was a poet, a songwriter and our own Rockstar. His writings will be treasured and shared by many. Louis loved sports and enjoyed watching games with his friends and family, and attending Rock concerts, but had a love for different types of music too.

Louis worked at jobs in roofing, carpentry, construction, and had a love for Theatre. He graduated from college in Calgary with a diploma in Theatre Arts/Technical Stream in 2003 and worked at Banff Centre as a Stage Manager.  Most recently Louis received his Construction Craft Worker – Apprentice Level 1 from the Okanagan College, Kelowna BC, and wanted to go on  to complete the Red Seal Carpenter Certification.

The treasured loves of his life were his daughters, Jessica Lynn Patterson (Mom Trena) and Jozee Cyr- Neighbor (Mom Renee) who were a source of love, pride and happiness to him his whole life. Tragically he lost Jessica on November 29, 2016 and it broke his heart. He had just lost his Mom on September 16th and his brother Rene on October 6th. Louis was a rock during this all and supported his family giving love and strength, in spite of his own heartbreak.  Louis was a wonderful help with our Mom in her time of sickness up until her passing. Our family is thankful to have had him there with his patient and selfless help until our Mother’s passing, and his help as his brother Rene fell ill.

Louis loved his family and friends fiercely and told them all the time. Louis had his troubled times as we all do, but had overcome them and was on a good path with his life, and love of God. He would always find a church to attend on Sundays wherever he was and it brought him great peace. Louis was individual and unique and made a striking impression wherever he went. Louis had a deep respect for his Native Cree heritage and traditions.

Louis is also loved deeply by all his Aunties, Uncles, Cousins, Nieces, Nephews and their Spouses and Children, and of course his many, many friends.  Rest in Paradise Louis until we see you again.

Offer Condolence for the family of Louis Neighbor 1969-2017