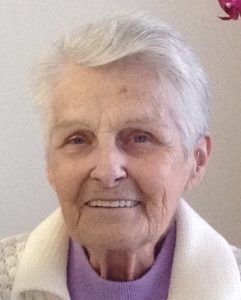 It is with profound sadness that we announce the passing of Marion Clara Landals (nee London) on July 5, 2019 at the age of 92. She was born January 1, 1927 in N. Vancouver, BC to Frank and Clara London.

She leaves to mourn her children Clint (Lynn), Lorraine (Owen), Michell, Jean (Dennis), Pat (Maureen) along with her 14 grandchildren and 12 great grandchildren. Predeceased by her siblings Muriel (Bill), Bill (Edna), Frank (Peggy), Barbara (Ron), she is survived by her brother Don (Betty) and many nieces, nephews and extended family.

After enjoying a short career with the BC Telephone company, Mom moved to Jasper where she married and started her family. After several years in Edmonton, Kamloops, and Vancouver she made her final home in Kamloops to be near her children. In her early years in Kamloops she enjoyed her time as an officer of the Navy League Wrenette Corp, and she was an active and valued member of the Eastern Star local chapter until recently.

She had a kind and loving heart and will be sorely missed by her family, and many friends.

Mom spent the last 7 years of her life at Bedford Manor, where she received the best of care from the staff. She always enjoyed the hugs she received from each of them.

We would like to extend our sincere thanks to Dr. Rollheiser, and the nursing staff on 5-south, for their excellent care of our mother during her final days. You were exceptional.

There will be no service at mom’s request.
Donations will be warmly received at the CNIB.