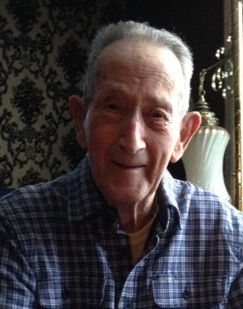 Sandy served with the 4th Bn. Kings Own Scottish Borderers 52nd Division during WWII as a Small Arms Instructor and Sniper Sergeant.  He was a member of the Royal Canadian Legion for over 50 years.

In 1950 Sandy married Edith. They moved to Canada where he established a plumbing and heating business. In January 1961 he relocated the family to Barriere where he lived for 55 years.  He was a journeyman plumber and pipefitter and was a member of the Plumber and Pipefitters Union Local 170 for 55 years.

Sandy was a wonderful husband, father, grandfather and great grandfather.  He loved to tell stories of his childhood and other adventures. He was a man of great honour, dignity and courage.  Sandy was well loved and will be sadly missed by family and those who knew him.

A Memorial Service for Alexander “Sandy” Scott will take place on Saturday, May 28, 2016 at 2:00 PM at the Seniors’ Centre in Barriere.  Memorial contributions to the Heart & Stroke Fund would be appreciated.  Condolences may be directed to the family at DrakeCremation.com