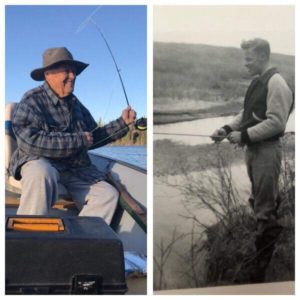 Pat was survived by his loving wife and best friend of 64 years Barbara, sons’ Brian (Jackie)Kamloops, Gary (Jamie)Kamloops, Dave (Deanna) Clearwater, daughter in law Cindy, Lamont Alta, and 20 cherished grandchildren and 19 great grand children.  He was predeceased by his parents and 3 brothers and sisters-in-law, and then his son Barry in 2016.

Pat was born on March 17, 1932 (St Patrick`s day) in Calgary Alta. In his early years he spent lots of time hunting and fishing with his dad and 3 brothers and has continued to do so with his boys and grandchildren until he became ill. Recently he has had a couple of last fishing trips and thoroughly enjoyed them. In 1952 Pat started work with Royalite Oil in Calgary in the accounting dept, where he met the love of his life Barbara at work. They married in 1954. He took a transfer to the Kamloops refinery in 1968 and worked the rest of his career with Gulf oil until he retired in 1983. After the purchase of their new house in 1970, he began landscaping and gardening to create the beautiful yard that he was so proud of until the end. Pat had a green thumb and could grow anything. He spent many hours planting, weeding and harvesting. His hard work was enjoyed by his family, friends and neighbours.

His other loves were fishing, hunting, and camping, and he spent as much time as possible with all the family pursuing these interests.  Pat has now joined Barry on a long fishing trip and will be forever loved and remembered for his dedication to his family. Keep your lines tight, till we meet again.

There will be a celebration of life at the Hamlets,  3255 Overlander Drive, Kamloops B.C. In the Grand Hall on Thursday July 26, 2018 @4 pm.  Condolences may be sent to the family at DrakeCremation.com

In lieu of flowers donations can be made to the Canadian Diabetes association, the BC Kidney foundation, or a charity of the donors choice.

Offer Condolence for the family of Patrick Tomlinson 1932 – 2018