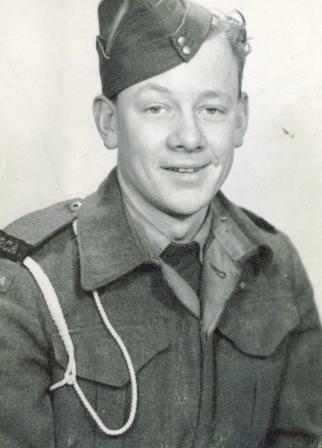 Royce was born on May 26, 1925 in Bangor Saskatchewan. He passed away peacefully after a lengthy illness at Marjorie Willoughby Snowden Memorial Hospice Home in Kamloops, British Columbia. Royce was 90 yrs old.
Royce is survived by his loving wife Nancy, children Eric (Maggie) of Barriere, BC, Judy of Chilliwack, BC, Wendy (Barry) of Columbia Valley, BC, Tim of Fort St. John, BC, Trevor of Lumby, BC, Saen of Victoria, BC and Tracy (Denine) of Fort St. John, BC. Royce had fourteen grandchildren: twins Cord and Amanda, Dana, Les, Lindsay, Sarah, Scot, Rob, Stephen, Nicholas, Michael, Kyla, Carter, and Nathan. Twelve great grandchildren Emma, Ethan, Declan, Morai, Ria, Noah, Mia, Emmalyn, Jessie, Parker, Adalyn, and Mason. He also is survived by his sister Frances, his brother Carman and numerous nieces and nephews.
Royce was predeceased by his parents Gerald and Mary Ellen, sisters Verna (Cederholm) and Vivien (James), and by his grandparents William and Edith Gibson.
Royce received a grade 8 education and spent his life in the logging industry, working hard every day. He was a loving husband, so proud of his children and he was an awesome grandpa. He had a great sense of humour, loved to sing and play the guitar or violin, especially in church. He was an employer of Halfway Creek Logging for many years. He loved working in the woods. Royce was a train buff; steam locomotives were his passion. He made models of them in his shop and numerous other wooden products. The last two years he learned to spool knit touques from donated yarn and gave them to family, friends and organizations.
His wish was to be with the Lord and we are so thankful for the time he had with us. A gathering for Royce will be decided at a later date, by family request. Donations in memory of Royce Gibson may be made to Barriere Medical Clinic and the Marjorie Willoughby Snowden Memorial Hospice. Arrangements entrusted to North Thompson Funeral & Drake Cremation Services, Barriere, BC, 250-672-1999. Condolences online to family at NTFuneral.com

Rest in peace dear one.