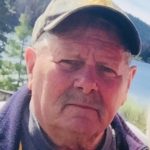 In the early morning hours of April 3, 2018 Darryl slipped away peacefully after a lengthy and courageous battle with cancer.  Over the last 8 years he lived his life to the fullest with dignity and didn’t complain or let it get him down.  Darryl was born on February 5, 1939 in Vancouver, BC and passed away at the Marjorie Willoughby Snowden Memorial Hospice Home in Kamloops, BC.

Darryl is survived by his wife, Carol, having just celebrated their 58th anniversary.  They were married in Burnaby, BC on April 2, 1960.  Also survived by his children Susan (Jim) Pate, Heather Savitsky (James Lockwood) and Michael (Anita) Bell.  His grandchildren Matthew (Heather Stephens) Pate, Samantha (Liam) Wacey, Laura (Tyler) Holm, Robyn (Colton McLean) Savitsky, Sydney Bell and Nicole Bell.  Also survived by his two sisters June Senger and Phyllis Davis, sisters-in-law Lynn Bucholtz, Patsy (Ralph) Douglas and brother-in-law Jack (Ollie) Woolard and many nieces and nephews and extended family.  He is pre-deceased by son-in-law Kevin Savitsky, his parents Fred and Winnifred Bell, his brother William Bell and brothers-in-law Russ Davis, Phil Senger and Art Bucholtz. Darryl was a dog lover and will be sadly missed by his walking companion of these last 6 years, Charlie.

Darryl was raised in Vancouver, BC and was a heavy duty mechanic by trade.  He and the family moved to Cranbrook in 1970 and then to Kamloops in 1976.  During his children’s younger years, Darryl coached their softball teams and was an avid supporter of all their activities.  He was also a very enthusiastic grandfather and enjoyed watching his grandchildren participate in their various activities. Darryl was a member of the Kamloops Curling Club, a Life Member of the Kamloops and District Fish & Game Association (KDFGA) and a 31 year season ticket holder to the Kamloops Blazers Hockey Club.

Many wonderful years have been spent at the family cabin at Surrey Lake with all members of the family and their friends being welcome to come and share this beautiful spot.  He loved to fish and learned how to tie his own flies. Spending time riding the ATVs, playing “Horseballs”, sitting around the fire having a beer or two was always a fun time.   Darryl liked to putter and was constantly upgrading the comforts of rustic cabin life.  He was an avid hunter, having many trips back to the Kootenays and also hunting around the area at the lake in the later years. When the pine beetle came through the area and killed off so many trees, Darryl turned a negative into a positive by making clocks out of rounds cut from the trees. Over the years Darryl has donated many of his beautiful clocks to charities and organizations for fund-raising. He was always willing to help out where he could.  Many family members are also proud owners of these clocks. Darryl was a jack of all trades and could fix just about anything and when in doubt he could figure out some unconventional way to attack the problem. Darryl was a man of very few smiles but you always knew how important you were to him.

Darryl was very involved in many KDFGA projects over the years such as the Burrowing Owl nests, Fishout for the Visually Impaired, Family Fishing Day and the Sheep Count.  He cared deeply about protecting, enhancing and promoting the wise use of the environment for the benefit of present and future generations. In the past year he established a bursary entitled The Darryl Bell Education Fund (DBEF) for students furthering their education in areas of conservation, habitat, wildlife, fish or enforcement of applicable regulations. Darryl’s love and respect for the great outdoors has been passed down through his children and grandchildren.

As per Darryl’s request, there will be no formal service. A couple of gatherings will be held in the early summer. The family wishes to thank Dr. Malan, his family doctor, and the doctors, nurses and staff of the Kamloops Cancer Clinic for their care over these years. We would also like to thank Laurie Campbell his Home Health Nurse and the wonderful staff and volunteers at the Marjorie Willoughby Snowden Memorial Hospice Home.

In lieu of flowers, Darryl’s request was that any donations be made to the Darryl Bell Education Fund, C/O KDFGA Box 164, Kamloops, BC V2C 5K6 or the MWSM Hospice Home, 72 Whiteshield Cr. South, Kamloops BC V2E 2S9. Condolences may be sent to the family via DrakeCremation.com