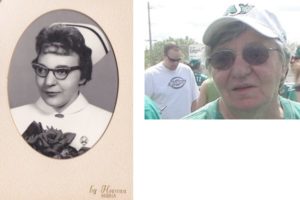 Mom passed away the morning of August 12, 2018 at the Ponderosa Lodge in Kamloops BC.

Mom is survived by her siblings, Hazel (Keith) Sprecken, and Melvin (Irene) Lafrentz. She will be dearly missed by the children she leaves behind Cheryl (Mike) Fisher, Gord (Helen) Shaw, and Melissa (Al) Rook-Green, as well as, her grandchildren and many nieces and nephews.

She was pre-deceased by many brothers and sisters and by son Evan who is looking forward to the re-union.

Mom was born in Halbrite, Saskatchewan. She attended elementary and high school in Halbrite -where she decided to take on the profession of nursing.

Mom moved to Regina after high school to attend the Grey Nuns Hospital School of Nursing.  She graduated and became an RN in 1960. She met dad, George Shaw, while attending nursing school and they married in 1962.  She worked very hard at being a community health nurse and helped put Dad through his articling to become a Chartered Accountant. Together they made homes and many friends in both Melville and Esterhazy, Saskatchewan.

Besides being a fantastic mother, Mom was an active member of the communities she lived in. Mom coached baseball in Melville in the 1960`s, and was part of the Kinette club in Esterhazy in the 1970`s. She excelled in curling becoming part of the Esterhazy curling culture and enjoyed many bonspiels in the 70’s, 80’s and 90’s.

Mom was a caring neighbour and enjoyed having a hoard of teenagers in the house listening to loud music.

In lieu of flowers the family asks that donations be made to the Kamloops Hospice Association.

Service is to take place at a later date.